One fine day, I was looking at my mobile screen sipping my tea under a tree. At one particular angle, I could see a pattern of colours reflected from my mobile screen. My mind was filled with questions "What could be the reason? , Why? , why? "

After pondering for a few days, I can up with an explanation. The display in my phone is made of tiny physical elements called "Pixels". These pixels diffract the incident light to form a pattern. Later that night I noticed a lot of phenomena occurring around me are attributed to Interference and diffraction effects. Their effect is ubiquitous. In this article, I will first explain theory behind these effects followed by specific examples that we encounter in our everyday life.

Waves are disturbances that carry energy, information etc from one place to another. For example, a sound wave carries that travels from a source (speaker) to a listener

The most common of them are sound and light waves. The light waves that are visible to the naked eye are in the wavelength  range of 400nm to 700nm and sound waves audible to the human ear are in the range 17mm to 17m. (Note the stark contrast between wavelengths of the two waves)

Interference is a phenomenon that occurs when two or more coherent( same frequency and constant phase difference) waves interact with each other. They redistribute energy in space that results in a pattern.

Have you ever wondered whether you can bend a wave, deviate from its path? If you have thought about it, you are in for a thrill. So why a light would bend? Imagine this, a small particle and a big hole. Do you think the big hole will hinder small particle when you drop inside? Obviously it won't. But what if the hole's size was comparable to the size of the particle? Yes, definitely it would obstruct and deviate its path. This is exactly what diffraction is about.
The bending of waves around the small corners/apertures (of the size of wavelength) is called diffraction.


In the second part of the video(single slit diffraction), a narrow slit comparable to the wavelength of incident wave, bends and spreads after passing through the slit.

A diffraction grating is a periodic structure with varying refractive index as depicted in the figure below. When light is incident on a grating, light is diffracted in different directions depending on their wavelength. When white light is incident on a grating all the colours are split and they are reflected and transmitted in different directions. Similar to a prism, one can obtain a rainbow pattern.

Light suffers a reflection loss whenever it travels from one medium to another. For example, you can see yourself when you stand in front of a glass door, the reflection of sky your car's windshield, etc.

Similarly, one of the main use of glass in our daily life is spectacles. When light travels through our spectacles to reach our eyes, some amount of light is lost at the glass-air interface. In order to minimise the reflection loss, the opticians coat a thin layer called the "antireflection coating" above the lens.

Now, how does it work?

An "anti-reflection coating" is essentially a thin film coated on top of the glass. The thin film is designed in such a way that the reflected rays from air/thinfilm interface and thinfilm/glass interface interfere destructively. Thereby it reduces reflection loss and more light enters the spectacles increasing the visibility.

Soap bubbles exhibit rainbow colours. Is it because of chemical constitution of the soap bubbles? Well no, the reason is similar to the phenomena happening in antireflection coatings, you just learned. The soap molecules attach themselves to the surface of water forming a thin film in circular shape(owing to minimum surface tension).

The soap film acts as a thin film. The reflected waves from the top and the bottom surfaces interfere. Hence we see soap bubble exhibiting different colours in different directions.

A hologram is a photographic film with a recorded inteference pattern. The true object picture is reproduced with paralax effect. This is possible because, the film stores the phase information along with the intensity values. There are two kinds of holograms, viz reflection and transmission hologram. A transmission hologram formed by interfering light reflected off from and a reference beam on a photographic film. When this film is illuminated with a coherent source(laser), the original object is reproduced. In a reflection hologram the data is stored layer wise. When light is incident on a reflection hologram, light is reflected from different layers of the film. Similar to an anti-reflection coating, different wavelengths are diffracted in different directions. That's the reason hologram in a security card or credit card exhibits different colors in different directions.

Peacocks feather demonstrate brilliant colours.  A common misconception is that the colors are due to pigments. The actual reason is due to the presence of periodic small grooves (diffraction gratings) present in peacock's feather. The periodicity of these grooves differs from one region to another. Each set of groove is responsible for the reflection of a particular colour. When sunlight is shined over the feather the light interacts with the grooves resulting in the spectacular colors. 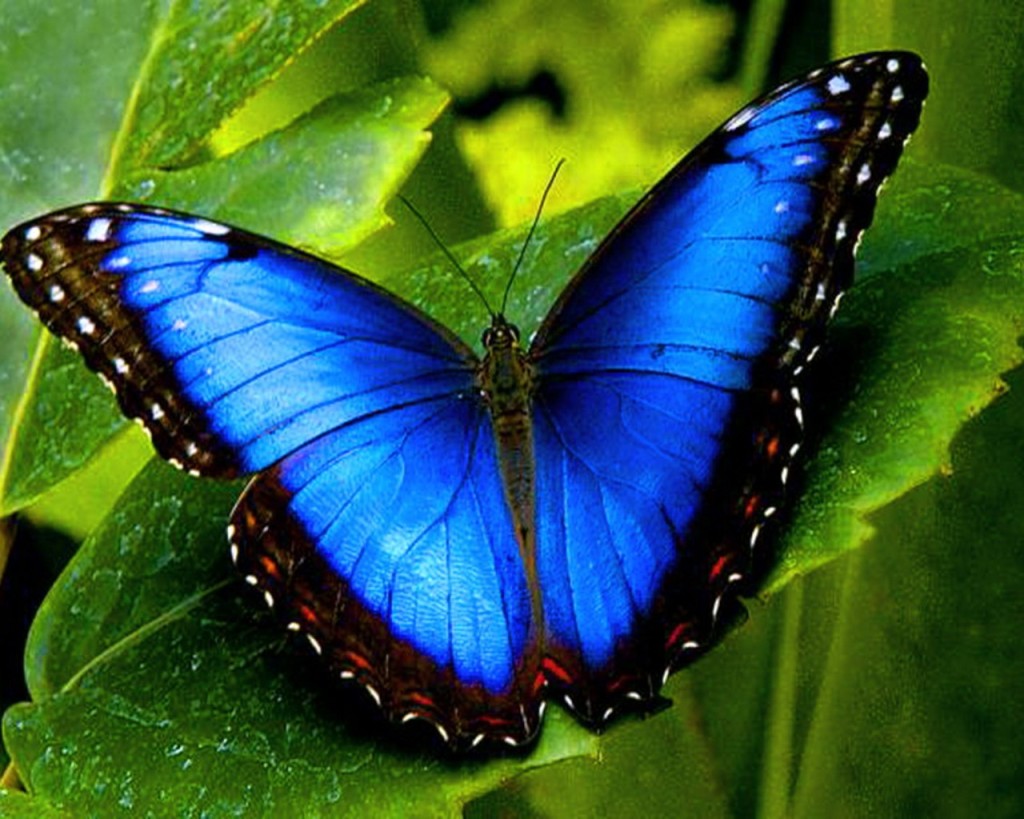 Some butterflies display shiny blue colour. Wings of this butterfly have diffraction grooves with a particular period that permits constructive interferece .

Displays are made up of minute periodic physical elements called "pixels". Each pixel is made up of the primary colors red, green and blue. High-resolution displays have high pixel density. These pixels are arranged with a periodicity comparable to the wavelength of visible light. Hence, when sunlight or a flashlight is shined upon the display, the light is diffracted resulting in a beautiful pattern.

Have you ever wondered why the back side of a CD ROM exhibits shiny colors? Why Blu-Ray discs have a superior storage in comparison to CDs? 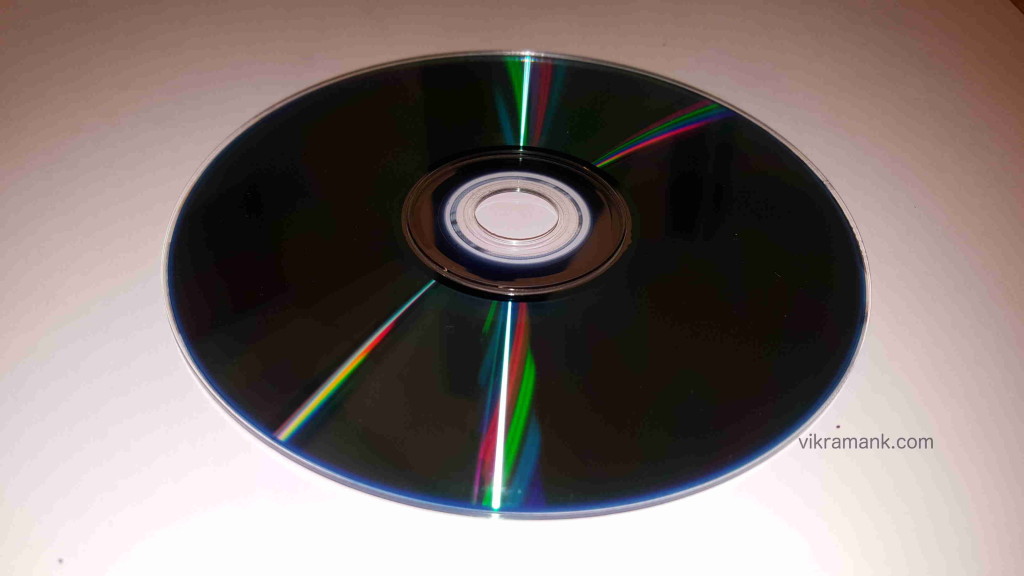 The data in compact discs are stored and written in small groves of the size comparable to the size of visible wavelength. Hence, when light is incident on them, the grooves diffract light in different directions.

What's special about Blu-ray discs? In Conventional CDs, reading data is done using a red laser. The wavelength of red color is around 680nm. Thereby the data storage is limited by red colour. In Blu-ray disc technology, Blue(wavelength) laser is used to read data.

Now that we read about light waves, let's turn our attention towards sound waves.

Have you ever wondered how a musician uses a tuning fork to tune his or her equipment?

Musical instruments like piano, guitar etc produce sounds at definite frequencies. For example, the musical note A4 has a frequency of 440Hz.  A tuning fork upon excitement emits a sound for a certain frequency. When two identical tuning forks and are placed next to one another, striking one of them causes other to resonate at the same frequency. If they are at slightly different frequencies, they cannot interfere and leads to a phenomenon called 'beats'. The musical instrument is tuned until beats are removed ensuring the instrument is emitting the same frequency.